We who live in prospering communities have heard of depopulation. Perhaps we have witnessed neighborhoods in decline. Maybe we've also known gentrification, as parts of our prospering cities change ethnic characteristics and families are forced out due to rising rents or land values.

Soon, of course, we will all become familiar with the phenomenon of climate-induced massive inland migration as rising seas inundate our coastal cities. That is depopulation on a grand scale!

What happens to people when communities "rust?" How does it happen that they gradually fade away, perhaps without any great event or fatal, dramatic crisis to mark their departure? In Brooksburg's case it could have been the simple rerouting of Route 56 (now the Ohio River Scenic Byway). Could it be that Brooksburg is recovering? We have no answers. But we offer these visual clues.


Brooksburg is not too far from Madison, Indiana, the  County Seat for Jefferson County, IN.  The 1900 census recorded a population of 149. At that time, Brooksburg had two churches (Baptist and Methodist), a Post Office, a weekly newspaper (the Brooksburg Sun), 3 general stores, a Knights of Pythias building (used as school classroom facility) and a creamery. - source: Liquisearch

By contrast, in 2017 the population is about 80. Two church buildings appear to be well maintained, one a Baptist congregation and the other unidentified, but probably the Methodist church.  Google Street View found no operating stores of any kind, no Post Office and no creamery. A number of foundation remains can be seen, one of which has been made into a basketball court & playground.

Below is a Google Earth view of Brooksburg with the routes Street View cameras took through the area marked in blue. The how and why of Street View coverage is a mystery to me. (Please comment below or email me if you can explain.) 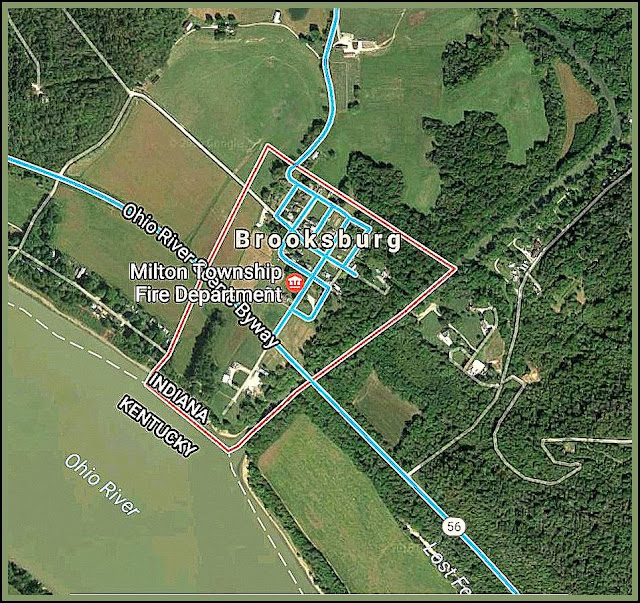 American FactFinder and Roadside Thoughts provide census and other information for Brooksburg. Based on the Street View tour, I question some of the livability assessments made by AreaVibes below. 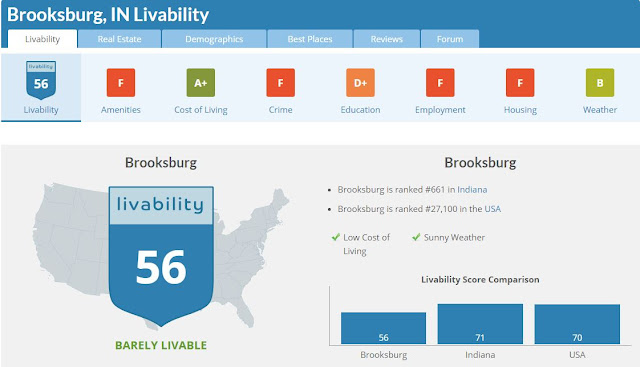 The "crime" rating seems to be particularly suspect, as none of the Brooksburg windows have bars on them, which would be expected in a community with an "F" crime rating.

The lack of public accommodations, local grocery and public transportation is reflected in the "F" given for "amenities." I suspect there is no municipal water, natural gas or sewer service. While the D+ for "education" results from the lack of any school in Brooksburg, nearby Madison IN has a good public school system, a community college branch and Hanover College. "Housing" appears to be inexpensive but unavailable. "Employment," of course, does not take into account those who may be operating home businesses (if any).

"Barely Livable?!" Not by a long stretch, AreaVibes! This beautiful community offers a combination of assets that could be very attractive for those working just 7 miles down the Ohio River Scenic Byway in Madison IN.

This is a small community. No government census can accurately grasp its spirit. Perhaps some of the Street View photos below, however, can provide a more adequate introduction.

Unless otherwise credited, all photos are derived from Google Street View, with links to each location provided in the caption.

Somewhere around here, there may be a trace of this old schoolhouse: