We who know not
What we do
Spend our time
Just passing through.
-- Wretched Poet


The Wagner Palace Car Company was founded by Webster Wallace in 1858. It had a long history of both competition and cooperation with the Pullman Car Company. Pullman bought it out in 1900. According to the Mid-Continent Railway Museum,

"The Wagner Palace Car Company was one of the largest employers in Buffalo in 1890. Its works occupied 35.7 acres at 1770 Broadway out at the east end of Broadway near Broadway and Bailey. In addition to brass finishers, the company employed blacksmiths, car builders, carpenters, carvers, marble finishers, steamfitters and even a storekeeper!"

In the Google View above, 1770 would be in the center of the picture. What a great location for a railway sleeping car company! Note the semi-circular building at 4 o'clock. It is a former railroad roundhouse, according to Forgotten Buffalo, one of a few 19th century buildings surviving into the 21st century in this area:

The Webster Wagner home in Palatine Bridge NY caught my attention as I journeyed down route 5 on Google Street View from Albany to Utica. 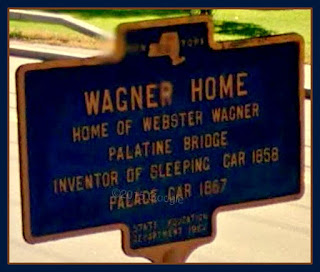 Photos that were included with nominating papers for the Wagner home's inclusion in the National Register of Historic Places show the home was intact at the time of filing, 22 March 1973. 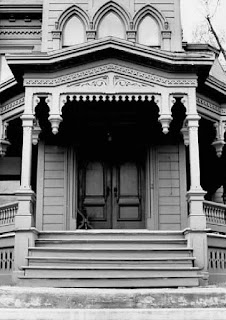 The National Register application summarizes the significance of this site, its history and the accomplishments of its owner as below: 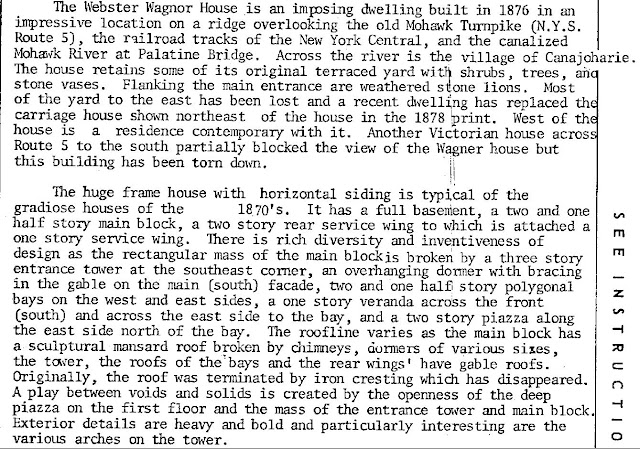 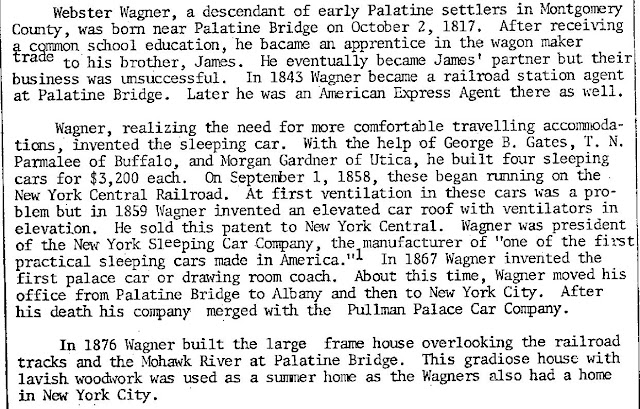 In Webster Wagner's lifetime, this residence was a showplace. It was filled with life and distinguished guests. Its fate, however, was not determined by its original owner or his family.

"Time and years of neglect by longtime village recluse Barry Woods have taken their toll." Mr. Woods occupied the back addition to the home for many years. He was resistant to the entreaties of his fellow citizens to restore the home, yet would not leave until local authorities forced him out when the structure began to collapse around him. Woods simply abandoned the place and ran away, leaving vehicles and other personal property behind. Since he did not pay taxes on his property and did not respond to registered mail, the Village sold the landmark home's remains at tax auction for $1,000 to Herbie Ambrose of Arizona. After being issued several citations for code violations, Mr. Ambrose sold out to Andre Anasta of Catskill NY. As of 2014, Mr. Anasta was in the midst of a controlled demoltion of the structure.

In 2012 photographer Bob Wood snapped the west facade of the Wagner home (via Google): 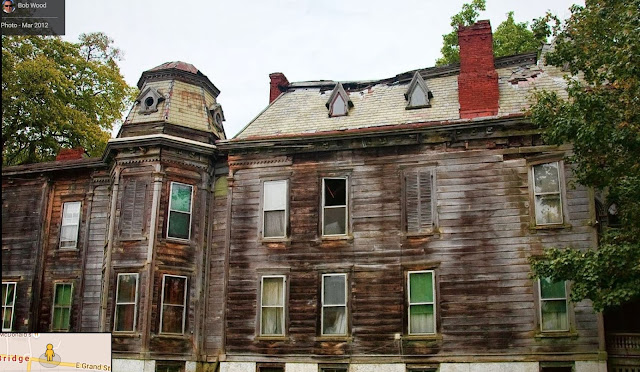 The heavy slate roof was beginning to weigh down the slowly rotting beams and would soon collapse.

Two years later, in March of 2014, photographer Rob Yasinsac took a great set of photos detailing the building's state of decay for HV-Rob, Hudson Valley Ruins. The comments on Rob Yasinsac's post include remarks from Jason Coppernoll's grandson. Jason Coppernoll owned the home at the time it was placed on the National Register of Historic places in the 1970s, and was the last owner to adequately maintain the property.

A photo essay appeared on 24 April 2014 in the Canajoharie Courier-Standard-Enterprise that featured a tour of the devastation with the latest owner, Pierre Anasta. At that point much of the structure was still sort-of standing, though precariously and Pierre was proceeding cautiously with demolition.

Four days later John Mason followed up with a long article in Hudson NY's Register-Star, explaining that the current owner was attempting to salvage whatever could be saved for later sale to interested parties to help finance a local gymnasium. The Mason article includes excerpts from interviews with former residents and visitors to the home.

In September of 2015, Google Street View cameras took photos of what remained: